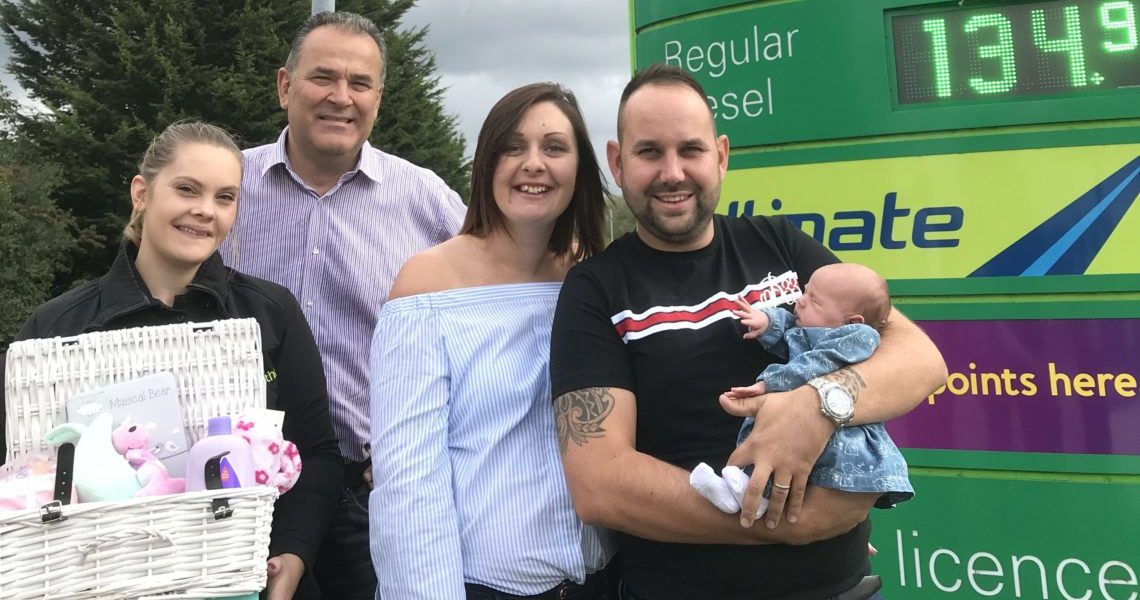 A woman who gave birth to her baby on the forecourt of a Sewell on the go service station has told how she will never forget her daughter’s dramatic entrance into the world.

Rebecca Smedley, 31, attended Hull and East Yorkshire Women and Children’s Hospital on Monday, August 13th to start the induction process and returned the following day. However, she was sent home and booked to return to the labour ward later that week.

But her baby daughter had other ideas and Rebecca knew time was not on her side when she woke with pains and contractions at 2.45am on Wednesday, August 15th.

With her husband Russell by her side for support, the couple drove their four-year-old son, Oliver, from their home in Leconfield to Rebecca’s mother and father’s in Beverley before making their way towards the hospital.

But as the pain increased, Rebecca knew she needed urgent assistance and rang for an ambulance from the car, with the call handler offering words of advice and support throughout the conversation.

When the couple realised they wouldn’t make it to the hospital in time, Russell pulled into Sewell on the go Dunswell and rushed to help his wife. Paramedics arrived within minutes and Lily Rose Smedley was born in the front seat of their white Volkswagen Tiguan on the forecourt at 4.41am, weighing 7lb 3oz.

Rebecca said: “As we were pulling out of my mum and dad’s street, I was screaming and I asked Russell to pull in. I didn’t know what to do – whether to stop, or try and get to the hospital – and I was in total panic.

“We were just looking at each other while the lady from the ambulance service was on the phone, trying to talk us through everything. I eventually told Russell to pull into Sewell on the go at Dunswell because I knew Lily was on her way and there was nothing I could do about it.

“Russell got out of the car and came to help me as I needed to push and, before I knew it, her head appeared.

“It was traumatic for both of us and, as I looked over my shoulder, a female paramedic had arrived, alongside a male paramedic in the front, and Lily was born in the car.

“They put her straight onto my chest and took me to the hospital. The lady who was working the night shift at Sewell on the go had also rang an ambulance but one was already on the way.”

Rebecca said she still can’t believe how Lily’s birth unfolded but is delighted to be back home enjoying family life.

The couple recently returned to Sewell on the go Dunswell for the first time since Lily was born and were presented with a hamper and gift for Lily after receiving flowers from the team following her birth.

She said: “If someone had said I would give birth without pain relief in the car, I would have said they were mad. It all happened so fast and I expected her to arrive at the weekend, certainly not as quickly as she did in the early hours of the Wednesday morning. There will definitely be a story to tell Lily when she is older.

“Receiving the flowers and gifts from Sewell on the go was really lovely and a very kind gesture. I’m so grateful to everyone who helped us.”

David Craven-Jones, Operations Director at Sewell on the go, said: “It is the first time this has happened on one of our forecourts and the circumstances were certainly very unusual.

“We’re delighted both Rebecca and Lily are doing well, and we wish the whole family all the very best for the future. Who knows, Lily may even come and work for us in 18 years!”