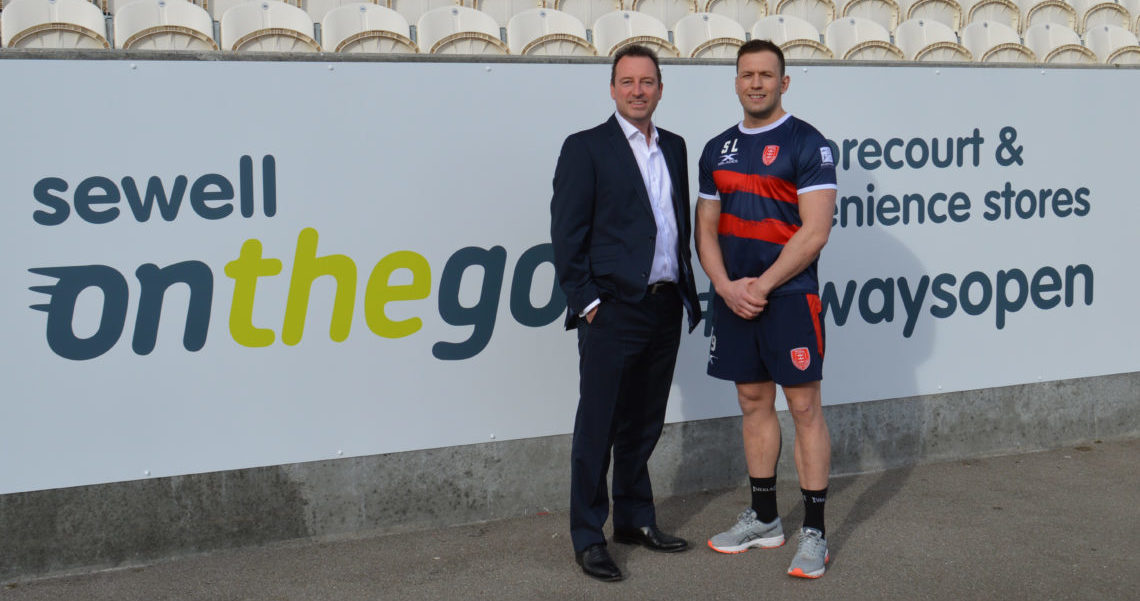 Local retailer Sewell on the go is back on board with Hull Kingston Rovers after becoming the new sponsor of the Colin Hutton Stand with immediate effect.

Sewell on the go, which operates 13 high quality fuel and convenience stores across the region, is a former sponsor of the Family Zone at KCOM Craven Park and has now taken its partnership with the club to the next level after committing to the stand sponsorship.

Rovers supporters will be able to see the Sewell on the go Colin Hutton Stand’s new look at tonight’s Betfred Super League clash with St Helens, with the club working hard to install the new signage ahead of a busy Easter period that will see the Robins compete three times on home soil over the coming weeks including a clash with local rivals Hull FC on Good Friday, televised live on Sky Sports.

Patrick Sewell, Managing Director of Sewell on the go, said: “We’ve worked together in the past with the likes of game sponsorship, corporate tickets and sponsoring the family zone – this is clearly one step further and we are proud to be associated with both Hull Kingston Rovers and the Colin Hutton Stand.

“Linking up with the club has always seemed a natural synergy in that both organisations are rooted within the communities of East Hull, indeed we’ve both been here since the late 1800’s.

“Five of our 13 stores in the city literally have KCOM Craven Park surrounded and as such, many of our customers are Rovers fans and vice versa, so it appears a natural fit to work with and support each other for the betterment of the local area and people.”

Part of the wider Sewell Group, Sewell on the go serves over four million customers every year making sure they have everything they need for their journey ahead. Key characteristics include providing the best quality fuel from market leader BP and having Costa Express self-service coffee bars in each store, whilst three of its locations in East Yorkshire are also home to Subway stores.

Paul Sewell, Managing Director of Sewell Group, said: “Colin Hutton was a Rovers legend and I’m pleased and proud Sewell on the go is supporting the stand named after him.

“Colin was also a great friend of Hull Animal Welfare Trust, a charity we have supported for many years, which makes this partnership even more personal to us as a business.”

Hull Kingston Rovers CEO Mike Smith added: “We’ve enjoyed an excellent relationship with Sewell on the go in recent years and to bring them back on board with their biggest ever sponsorship arrangement with the club is great news for our commercial team.

“Along with the recently announced Compendium Living East Stand, we now have two major businesses on board in some key areas for the club and that’s a real boost in our ambitions to keep pushing forwards off the field.”