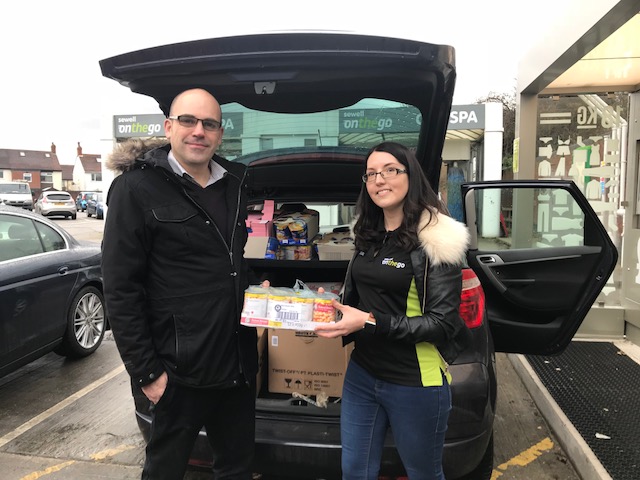 Almost 700 meals will be available to people in crisis after Sewell on the go staff and customers collected £1,000 of food to help make a difference this Christmas.

Collection points were put in place at Sewell on the go stores in Chanterlands Avenue, Sutton, South Cave and Hull West on the A63 at North Ferriby to gather donations for Hull Foodbank, which provides nutritionally balanced emergency food and support to local people referred to the charity in crisis.

A total of 283kg of donations were collected, which the charity said is the equivalent of 670 meals.

Emma Kordhaku, Sales Manager at Sewell on the go, said: “The appeal went so well and it was a real team effort from staff and customers. It was something new to us and we weren’t sure how successful it would be. But to be able to collect enough to feed all those people was amazing.

“One of our customers won some money on a scratch card used his winnings to buy some food to donate, which was just brilliant and so kind. All of the donations had to be taken to Hull Foodbank in two car journeys because there was so much.

“We’re definitely going to do it again next year and the aim is to double the donations to help even more people in crisis. We’d like to say a huge thank you to everyone who supported the appeal and helped to make it such a success.”

Hull Foodbank is based in King Edward Street, Hull city centre, and opened in 2011. It is part of a nationwide network of foodbanks, supported by The Trussell Trust, working to combat poverty and hunger across the UK.

Russ Barlow, Manager at Hull Foodbank, said: “The donation from Sewell on the go has helped around 60 people for between three days and a week, so it’s an absolutely brilliant effort.

“We’d like to thank all staff and customers for their support. We couldn’t do what we do without donations such as this.

“Every week, we have someone who hasn’t eaten for a day or two and mums who don’t eat because they give the food to their children. Some have the horrible choice of eating or heating and people don’t know what to do. They have to make really difficult choices.

“These are meals that people otherwise wouldn’t have had and it’s a brilliant time to make a donation now.

“There were a lot of toiletries and chocolate treats in the donation too, which is great because we can make up Christmas bags and that’s a massive morale boost for people.”

For more information about the charity and the support it offers, visit www.hull.foodbank.org.uk